The most incredible ancient sites in Turkey 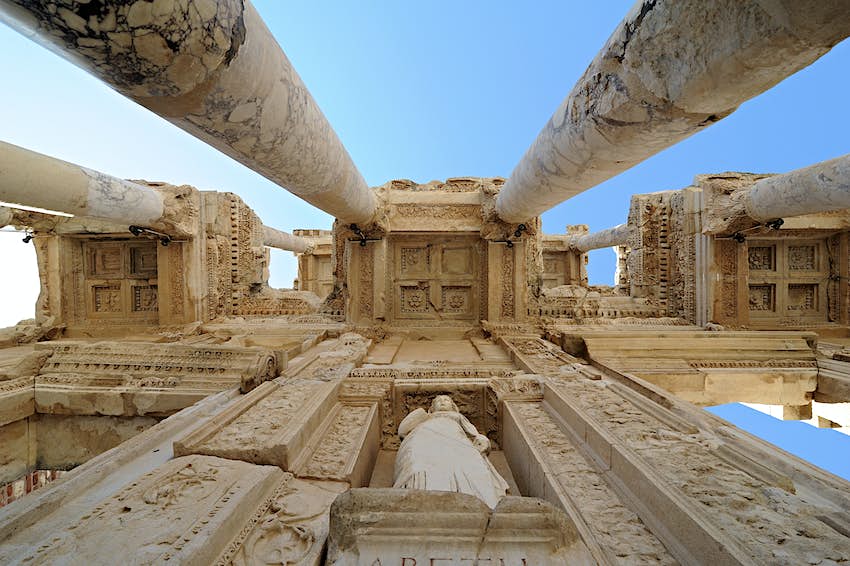 From classical cities scattered along the coast to archaeological sites that date back to the earliest periods of human history, Turkey's fertile plains, high steppe and rugged mountains have witnessed every stage on the human journey.

Even if you’re planning a beach break, don’t miss brushing up on some of this remarkable heritage while you're here. These are the best ancient sites in Turkey.

Come to this small hilltop pit of ringed megaliths to witness our earliest cultural beginning. Göbeklitepe's anthropomorphic T-pillars, decorated with carved vultures and foxes, were raised around 12,000 years ago in the pre-pottery Neolithic era when humans were still hunter-gatherers. Now recognized as the world’s earliest site of worship, and one of Turkey’s newest Unesco World Heritage sites, Göbeklitepe’s discovery turned on its head the accepted theory that religion followed the invention of agriculture and settled villages.

Göbekli Tepe is 6.8 miles (11km) northeast of Şanlıurfa. Visit Şanlıurfa Archaeology Museum before heading to Göbeklitepe to help you understand the site.

The Hittites were Anatolia’s ancient superpower. In the 13th-century BC, they took on the might of Egypt’s Ramses II in the Battle of Kadesh, resulting in the world’s first peace treaty. Today, the remains of Hattuşa, the Hittite capital, sprawl across a hillside rimmed by the remnants of some of the grandest defensive ramparts ever built in the ancient world. For the best views, walk through the gabled tunnel of the postern gate, and then up the monumental stairway cut into the massive manmade mound to the Sphinx Gate at the top. From here, a panorama of the upper city’s ruined grand palaces and temples, now reduced to scattered stone outlines, stretches down the hill.

Hattuşa is in the village of Boğazkale, 125 miles (200km) east of Ankara and 137 miles (220km) north of Cappadocia’s villages. With your own transport, you can visit as a day excursion from Ankara, and tour companies in Cappadocia offer private day trips. For a less rushed experience, stay in Boğazkale and explore the surrounding ancient sites of Yazılıkaya and Alacahöyük.

Wrapped up in myth, the site now claimed as Troy is several settlements built on top of one another, dating from the early Bronze Age (Troy I) to the Greco-Roman period (Troy VIII–IX). Its peak came during the late Bronze Age (Troy VI) when this city-state rose in power thanks to its position of control over the Dardanelles. Thanks to Homer’s Iliad, with its escapades of Achilles and company, Troy is one of Turkey’s most famous ancient highlights, but walking through its jumbled layers of ruins can be underwhelming and confusing. Make sure to visit the Troy Museum to help make sense of the site.

Troy is 18 miles (29km) southwest along the coast from Çanakkale. Many visitors arrive on an exceedingly long day tour from Istanbul. Stay the night in Çanakkale for a more leisurely approach.

Turkey’s Aegean and Mediterranean coastline is scattered with the ruins of small city-state confederations, such as Lycia, Lydia and Pisidia, which rose in prominence during the Iron Age. According to lore, Perge, in ancient Pamphylia, was founded by refugees escaping the Trojan War, kick-starting this city’s ascent. The vast ruins, mostly dating from Perge’s later Hellenistic and Roman eras, include two nymphaeums (monuments dedicated to nymphs), a bath complex and a commanding Hellenistic gate marking the beginning of a long colonnaded street. Climb up to the acropolis to capture photos of the dramatic sweep of the street below.

Perge sits 10 miles (16km) northeast of Antalya's city center. You can take Antalya’s AntRay tram nearly all the way to the ruins. Get off at Aksu tram stop and walk 1.2 miles (2km) to the site entrance.

Many of the Aegean and Mediterranean city-states were swept up into the great Persian and Hellenistic empires that vied for control over Anatolia. But Lycia’s fierce independence gained them a level of autonomy over their own affairs. Ancient Lycia stretched roughly from Dalyan to Antalya, and even after Romans stomped over to stake their claim, this contrarian confederation of 23 cities was still self-governed. Head to Patara, better known today for being home to Turkey's longest stretch of beach, where the Lycian ruins of the ancient city ramble all the way down to the sand.

Patara’s ruins trail for 0.9 miles (1.5km) between the beach and the little village of Gelemiş, 10 miles (16km) northwest of Kalkan. You can easily visit from either Kalkan or Kaş, but Gelemiş itself also has relaxed family-run guesthouses.

Most first-time visitors to Turkey include Ephesus on their itinerary. It's one of the world’s best-preserved classical-era cities. Although Ephesus has a history that stretches much further back in time, it’s the monuments and civic buildings raised when it was capital of Rome’s Asia Minor province that have made this one of Turkey's most popular tourist sites. Walk along the marble slabs of the Curetes Way, between the ornate, pillared façade of the Library of Celsus and the 1400-seat Odeon, and past the brothel and fresco-decorated terraced houses, to get a glimpse of day-to-day life in the ancient Mediterranean world.

Ephesus is an easy, flat 1.9-mile (3km) stroll from the easygoing small town of Selçuk, which is the best base for a visit.

While the coastal cities under Rome were buzzing, out on the edges of the empire in the mountains of southeast Turkey, an obscure little kingdom sat in the buffer zone between Roman rule and the might of the Parthian Empire to the east. The Commagene Kingdom’s most famous king was Antiochus I, who in his 32-year reign managed the tight-rope task of keeping relations friendly with his bigger neighbors on both sides. Not known for his lack of ego, Antiochus built a monumental burial mound as tribute to himself atop Nemrut Dağı (Mt. Nemrut) and called it the "throne of the gods." The statues and toppled heads of Antiochus surrounded by his godly friends on the summit are one of Turkey’s eeriest ancient sites.

Nemrut Dağı sits within Nemrut Dağı National Park. The summit is 33.5 miles (54km) northeast of Kahta. Independent travelers generally use Kahta, Adıyaman or the village of Karadut on the mountain itself as their base.